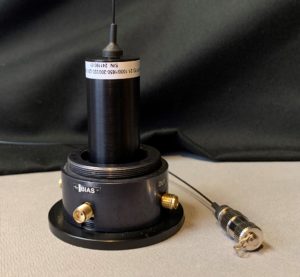 Amplification Technology developed and offers various photon-detector array configuration as well as single photon-detector. Our photon detectors are based on a unique semiconductor photon detection technology: Discrete Amplification Photon Detector (DAPD). The technology is based on a multi-cell design, where a photo-detector is comprised of many (hundreds) micro-channel cells, so called micro-cells. These micro-cells are electronically grouped together to form the anode of the photodetector.
In addition, monolithic integration of a negative feedback mechanism completed this design, to form the DAPD. The outcome design is one that operates with a direct current biasing, in which the DAPD is always on, and does not have “dead-time”. The output of a detected photon, or an ensemble of photons, is an electronic short pulse, with height that is proportional to the number of detected photons.
Using the patented Discrete Amplification technology platform, photon detectors were implemented, with a wide dynamic range: from detecting a single photon, with approximately 25% single-Photon-Detection Efficiency, (PDE), up to thousands of photons, with a signal that is proportional to the number of photon.  The DAPD is specifically usable in Light Detection And Ranging (LiDAR) applications, especially when comparing the DAPD to Geiger-Mode Avalanche Photo-Detectors (GM-APD), because of the high throughput, the wide dynamic range, and the simplification of the biasing electronic circuit.  One of the main advantages of the DAPD is the simplification of the post-detection digital signal processing (DSP) functions that are necessary to generate the point cloud rendering of the 3D scanning scene.  More details can be found here.
In summary the DAPD is a detector/array that is specifically optimized for LiDAR applications, operating in the 1550nm wavelength range, with the following benefits:
Read More

Output signal is proportional to the amount of photons per pulse

Fast response (rise time <0.4ns), which is a function of a micro-cell, not the active area (photo-detection aperture) size

Extremely fast recovery of a single micro-cell: with half time for recovery of ~50ns to 100ns